When we moved into our apartment we decided that we only wanted it to be partially furnished, we asked the landlord to provide only a bed and a TV.  This was mostly as we would rather have our cat damage our own property rather than anyone else’s, as well as just wanting to really make it our own.  That said we have been doing a lot of shopping in the last few weeks.  And as we are getting a bit older and starting to think it would be good if the things we buy last a bit longer it has not been a one-stop Ikea shop to fill this place, though today we hit the jackpot there!  We have often discounted the rugs at as Ikea as we thought they were too expensive to be from Ikea.  Today we had a long look at them and found a few that we really liked (and all were more affordable than the Muji rug we have been pining after).  We decided to wait on it, but then as we passed though the ‘As Is’ department, we saw the rug we had liked for 60% off, all due to a small sticker and a few creases.  In the spirit of saving money we went for it and are so pleased!  It fits in the budget and leaves a bit extra for our dining table and chairs.

The damage warranting 60% off 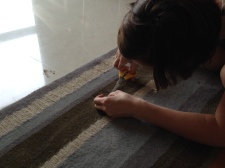 A little bit of effort… 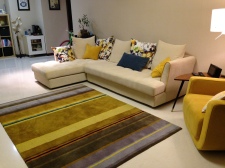 Beautiful! That is until Ravi has his way with it…

In Tianjin there are two choices for furniture (as far as we know, please comment if you know of other places!): Ikea and Macalline.  Macalline being 5 floors of anything you could ever want when building or furnishing a home.  It can be a bit overwhelming as it is so big (with many of the same pieces repeated again and again), but we were lucky to find a sofa and chair that we really love.   Besides simply trying to find the right furniture we are weighing in the cost.

So we extended our search to Beijing, just looking the internet there was nothing that jumped out, but I kept coming across Gao Bei Dian.  It is quite a way out from the city centre but definitely worth the trip.  The 500m walk from the subway station was less than convincing as all that could be seen were car showrooms and construction sites, we were worried we had wasted a day in the sweltering summer heat, until we stumbled upon our first furniture shop.  Which just happened to have a table we had been looking at online!  We found all sorts of shops: beautiful showrooms with antiques and modern pieces, tiny spaces with tables piled a top each other, and small boutiques with elegant displays.  It seems as though we had found the physcial stores for all the TaoBao shops we have been browsing the last few months. Despite finding what we had originally wanted we are now plagued with having to choose between several fantastic choices, and we are even considering the money saving option of an Ikea table.

Besides simply trying to find the right furniture we are weighing in the cost.  We recognise that unique, quality furniture is going to have a higher price tag, however we are trying to be sensible and not break the bank.  The last two days we have walked over 37,000 steps in search of… hopefully ten days on the beach can help us come to a decision.