Little T is staying in touch with his Chinese roots!

We were lucky to find a Chinese woman, who ironically is from Tianjin, who makes and sells dumplings. We have a big bag in the freezer for whenever the craving hits. I have still yet to find the right vinegar, but for now we substituted some Vietnamese vinegar which is close enough. So glad our little guy enjoys them as much as we do, he even drank the cooking liquid! 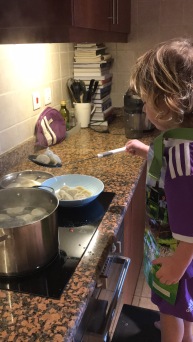 This would be our 12th and most likely final appointment. It was a Sunday afternoon, the sun was shining and Mr T and I were enjoying a lovely day together. We thought it was funny when our translator greeted us by saying; “You’re in a great mood today!” I just laughed out loud, amused by what she must think of me.

It was a simple appointment, vitals, urinalysis and fetal heart monitoring. We did have a bit of a scare when the monitor stopped recording, the nurse had to come in and replace the cord but all was fine from there, though the new cord only recorded heart beat but not fetal movement. I could still feel the baby moving so I wasn’t concerned, we were just hoping we wouldn’t have to sit through another 20-minute session of monitoring.

In with the doctor she said my stats were good and she did a physical exam, not surprised to find baby still in breech position. The doctor said she would like to preform a cesarean birth between the 9th and the 16th of June (39-40 weeks). We expected this and said we would schedule for the 16th, still leaving some time for birth to start naturally but accepting the doctor’s wishes not to go past 40 weeks. It was amazing how quickly they were ready to process us in for the surgery, forms were filled out in no time and I had confirmation text messages before we had even left the building!

Although we had succumbed to scheduling the cesarean, I still came with two lists of points that are important to us whether it is a cesarean or natural birth and as much as they were probably annoyed with me, I took the time to go through each one. It was a kind exchange this time and Mr T and I feel that we understand what the hospitals procedures are and that they understand our wishes. I have since typed up my own birth plan and had a friend translate each point so we can have a clear quick reference on hand, just in case.

So that’s it, next installment should be about the birth of our baby!!

As it often happens in the small world of expat living we by chance met a couple that had recently (one year ago) had their baby at AmCare. It was just after our last appointment and we were still feeling a bit negative. They had had a great experience at the hospital, I think this was because of two factors: the woman was Chinese, so there was less of a dependency on the translators and the man was very up front and asked for (and got) what he wanted. Before committing to the hospital he wanted to meet with the president of the hospital and would settle only for the lead doctor in the hospital to care for his wife. It was nice to speak to another couple who had used our hospital and hear some positive things. The woman has continued a personal relationship with her doctor and made a few calls and got us an appointment with her. We were unsure what this appointment would be like. Our translator canceled with our original doctor and scheduled us with the new doctor. We didn’t know what type of dialogue (if any) had occurred between the doctors or the translator about us. Had she been warned to watch out for the moody, demanding westerners or were we just another patient to her… This appointment was a very simple one with just vitals, urinalysis, fetal heart monitoring and then a visit with the doctor. It did seem as though the translator was being a bit kinder toward us, and I as well had vowed to come in and stay calm and accepting. The new doctor took great care to explain everything to us, starting with the fetal heart monitoring report, describing what each line meant (contractions, heart rate, and fetal activity) and told us all was normal. Upon her examination she found the baby to still be in breech position and she took the same stance as our previous doctor, but with a bit more sensitivity in her delivery of information. She also did not recommend acupuncture to attempt to turn the baby. She is willing for us to wait to go into natural labor, but would not feel comfortable going past the 40 week mark. We made it clear that we were not expecting anyone to try to vaginally deliver a breech baby, because we think that they think that is what we want, (from what we can tell it is just not done in China), but we would like to give the baby as much chance as possible to turn or let us know it is ready to be born by labour beginning. She explained how the hospital would define cesarean and emergency cesarean and the costs that accompany it. We asked how many days in advance did they need to schedule a cesarean (they can do it the next day). We left the appointment feeling secure in the care we were being given. We know we have done what we can to help the baby move and if it sticks in breech there is a reason for it. What is most important is not how the baby is born but that the baby and mum are safe and healthy. -Mrs T