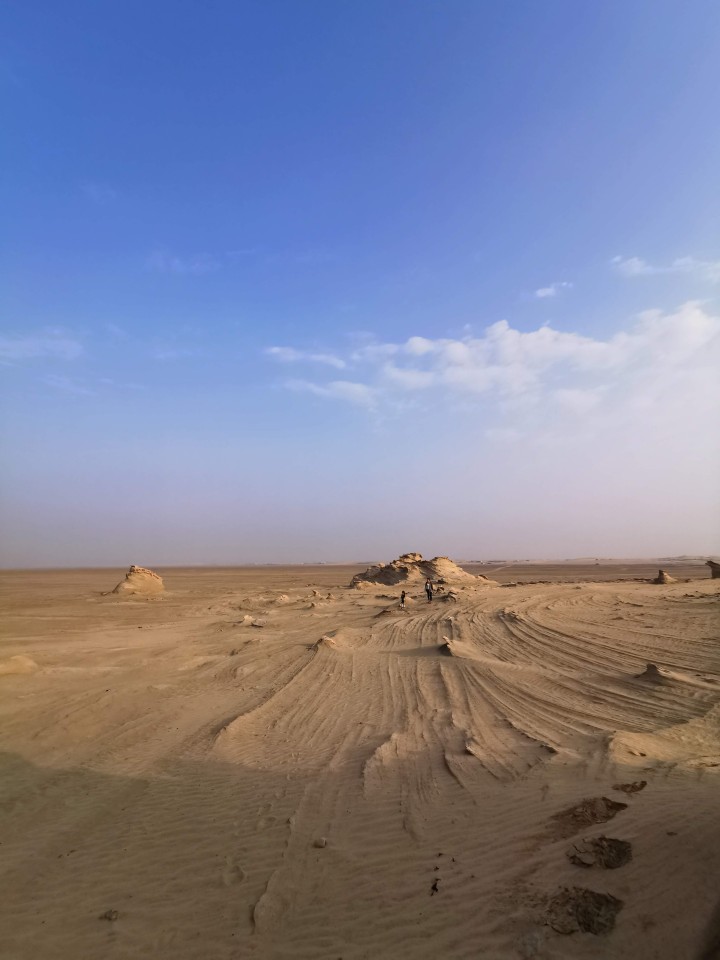 Today we were tourists in our own town. We took a short, 45 minute journey to our North to see some gorgeous rock formations.

The adventure nearly didn’t happen and Little T was pretty insistent he wasn’t going. He wanted to have morning movie time and was also scared to find scorpions in the desert. But we persevered and agreed that if he didn’t like it we could turn right around and come home. As usual he loved it and was so glad that we were there. 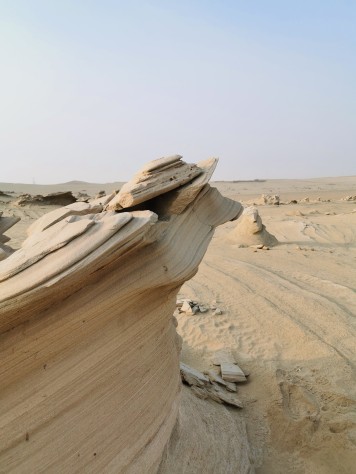 The photo opportunities were stunning and Mr T got some gorgeous shots. There were no fossils to be found but we did stumble upon a few camel bones and carcasses, luckily nothing too fresh, as Little T was so intrigued he wanted to pick up all the bones! As with everything we do there were so many learning opportunities here. Talking about how the formations were created, how did the camels die, why was the temperature different and so many other conversations.

It really was a great way to spend a Saturday morning, and we were amazed at how much cooler it was there than at our place. I will add it was not a well maintained tourist site, there was a fair amount of litter and leftover camp fires. But for a little local outing it didn’t bother us too much. 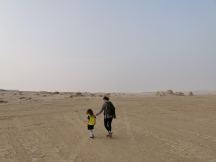 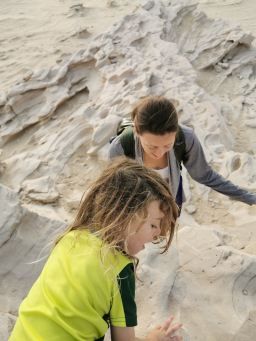 It really is true what is said about being in nature, we couldn’t help but feel relaxed and appreciate this place we live, a really lovely way to start our day.

One of the biggest changes I have made in my life since becoming a parent is slowing down. I have vivid memories of always driving too fast in my late teens/early twenties because I was so busy! Often working several jobs, going to school and balancing time with family members and friends, at the time I felt happy and it was probably what I needed then, I am so glad I don’t feel that way anymore.

Living overseas has really helped in this area of our life. Even our first two years of parents when we lived in the UK, I felt like I had to do, do, do. It feels quite natural slow down here in a new city, we know less people so there are fewer obligations. I guess I could be running around like crazy trying to meet people and make friends, but now I trust that it will happen when it is time. I make an effort but also relish in our slow, slow days.

This is an aspect of unschooling that I really love, allowing time for children to move at their own pace, which is often much slower than ours. Every time we leave the house I am grateful I am not on a time constraint to get Little T to school on time or myself to work. It is not always enjoyable to wait for him but I am glad I have the opportunity to do so.

Waiting can reveal such wonderful things. We recently visited the Abu Dhabi Children’s Library, an amazing place which deserves a post all of its own. On our last visit I noticed that Little T waited patiently as I gave my details and held up his hand to receive the wristband children are required to wear to visit. This is a big change to our prior 4 or 5 visits. Before he refused to interact with the staff at this check in and would not consider wearing the band. Observing this I made accommodations for him, for the first visit I held the band and stayed with him at all times. On future visits, he began to allow the band on the back of his shirt, and then this time it was his choice to allow the staff member to put the band on him. It really does seem like a tiny thing, but I noticed it and I am sure he did as well. He was given the space to make decisions for himself and to come around to it in his own time. By respecting his opinion I was putting our relationship first, which is what is most important for us.

Today our four year old ate ice cream for breakfast. This is not a regular occurrence but through the lens of parenting in a new way I was able to say yes to something that in the past would have been an automatic NO. I have been observing a lot recently and noticing we are finding a way to say yes more and more.

In the case of the ice cream, it is not something I usually have at home at all. But he requested it last week and then forgot about it. When he asked me this morning the voices in my head were saying, “No way! Ice cream is not for breakfast!” But then the awareness muscle I have been working on reminded me, the time of day actually doesn’t make a difference, do I want to start the day with a battle of wills, and if he eats it now it will be gone and it won’t be an option on another day. So I supported him as he tried to find it in the freezer, reminded him to get a stool so he could get it on his own and then sat next to him and enjoyed my morning mug of hot water whilst he ate some ice cream. It was a small individual pot and he didn’t even finish it, there were too many other things to interest him that he didn’t stay put for long.

So while I don’t think it provided a great nutritional start to the day (but I can make up for that later) it did provide a connection between us, respect for him and his ideas and I think it had an impact on how the rest of our day flowed, it is only mid morning as I type this but it has been wonderful. 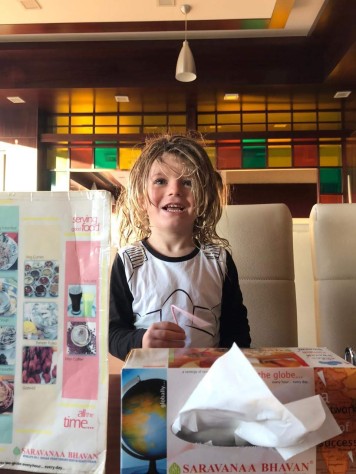 Another example of this was a few weeks ago. He and Mr T had ordered some mini figures from BrickLink and he had been waiting for them for awhile. Some days hearing they were not here evoked some big (angry) feelings. On this particular day he asked Mr T when he woke up when they would arrive. We had tracked them and they were in the shipping facility about 15 minutes from our house. “Lets go!” said Little T. It was seven am, Mr T was lying in bed and the office didn’t open for another hour but Mr T said, YES. This yes changed the trajectory of our day. I was lucky to lie in bed for a few more hours. They visited a new part of town. Had a drink in a local tea house and found one of our favorite eateries, SARAVANA BHAVAN that we didn’t know was so close to us. They had quality time together eating idly and dosa, and discussed that it was possible they wouldn’t get the mini figures when the office opened, as they could have already been loaded on the truck. Additionally Little T is not always the friendliest to new people and throughout this morning everyone had a hello/please/thank you or high five, and I think it was truly because of the connection that was made between him and his dad.

The story ends happily and they were able to take the package from the facility. He held tightly to it in the car all the way home as he didn’t want to lose any precious pieces. Another beautiful day followed based on that simple yes.

This type of parenting isn’t always easy, and the yes can be hard to find or to do when your own inner child is shouting at you from the inside that this is not they way it was for them. But it can be the way forward. It is the way for us.