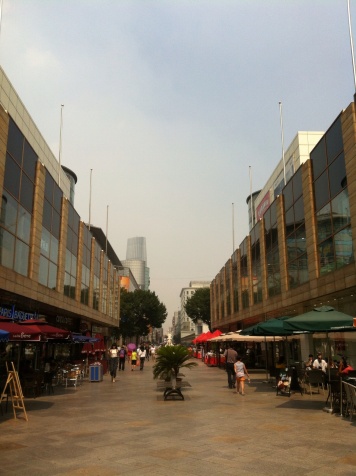 Dad, this one is for you. Never thought I’d find these shoes here 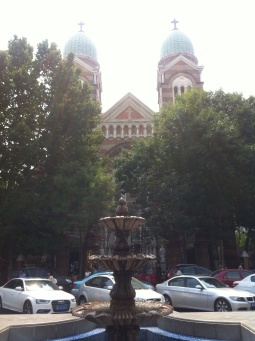 Lovely church and fountain we stumbled upon 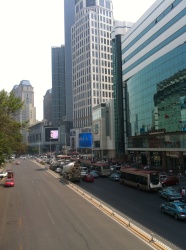 Our first Asian teas from It’s Time To 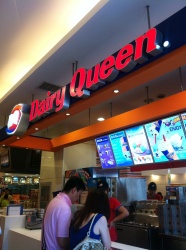 A bit surprised to see this here!

A bit of Chinglish: Margaret pizza

We set out this morning with the intention of finding a little French bakery around the corner, 6 hours later we arrived home exhausted but with a growing appreciation of our new city!

Tous les Jours turned out to be less than a kilometre away and was a lovely treat of carbs, which have nearly disappeared from our diet since we arrived. Whist I had originally had the intentions of going in to school to get ready for the start of term, adventure beckoned so my classroom could wait until tomorrow.

We decided to jump on the Metro and see what happened. Going on our memory from our city tour we went two stops to find not too much of interested. A little help from Google maps and we realized we needed to go a bit further. Two more stops and a total of 80 pence/$1.30 spent we found ourselves in the pedestrian shopping street. Shop upon shop, and mall after mall there was pretty much anything you could want. I managed to get a few staples at Uniqlo, though a bit off putting that I was buying size XL.

In addition to shopping we got some lessons in toilet habits of Chinese children. We witnessed one baby being held over a plastic bag having a poo, and later a young girl being held up to wee in the bin. All of this in public in the middle of the street!

Any number of food was there as well from McDonalds, KFC, juice and tea shops, Starbucks, Costa Coffee, the list could go on and on. We were able to get a few groceries at Japanese grocer Isetan. A nice combination of home comforts, like Organic Valley milk and a selection of cheeses, and local produce and goods.

Back on the Metro which I have to say was easy to use and ever so clean and we were home within 10 minutes. It was a great day of exploring! We are feeling more and more comfortable and happy in this new city.